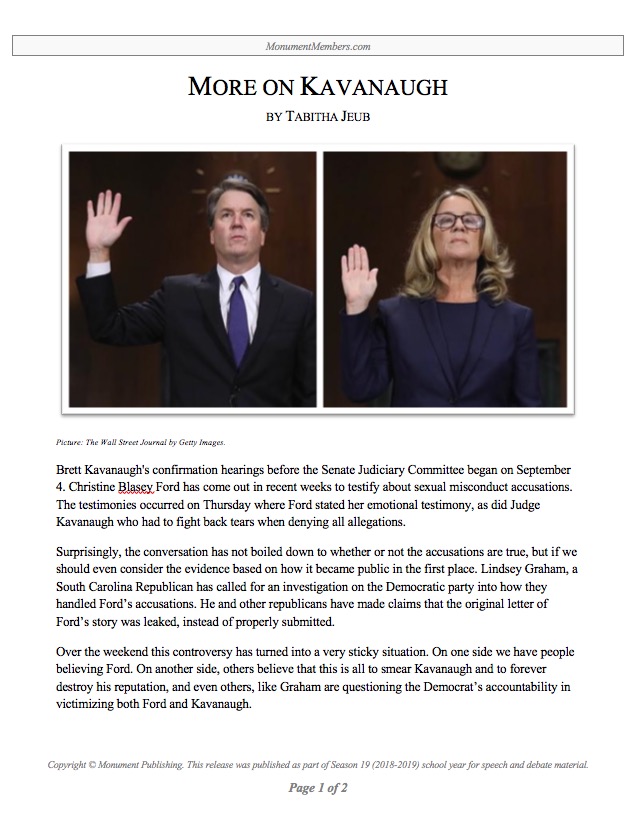 About "More on Kavanaugh"

Brett Kavanaugh’s confirmation hearings before the Senate Judiciary Committee began on September 4. Christine Blasey Ford has come out in recent weeks to testify about sexual misconduct accusations. The testimonies occurred on Thursday where Ford stated her emotional testimony, as did Judge Kavanaugh who had to fight back tears when denying all allegations.

Surprisingly, the conversation has not boiled down to whether or not the accusations are true, but if we should even consider the evidence based on how it became public in the first place. Lindsey Graham, a South Carolina Republican has called for an investigation on the Democratic party into how they handled Ford’s accusations. He and other republicans have made claims that the original letter of Ford’s story was leaked, instead of properly submitted.

Over the weekend this controversy has turned into a very sticky situation. On one side we have people believing Ford. On another side, others believe that this is all to smear Kavanaugh and to forever destroy his reputation, and even others, like Graham are questioning the Democrat’s accountability in victimizing both Ford and Kavanaugh.

This week’s topics of debate include the Kavanaugh hearings, racial tensions, Elon Musk, Italy’s financial problems, whether public apologies matter much, and more!

Click Here for complete information on permissions. All Membership content and Library Archives are proprietary intellectual content, so please respect our copyrights. Simply put, if you are not a Monument Member or a Library Access Owner you may not use it or share its content. If one partner of a debate team is a member and the other is not, the one who is a Monument Member must be the controller of the logins, downloads and incorporation of the Monument Membership material. Sharing logins is strictly prohibited, the only exception being from immediate family members within a single household.

Tabitha Jeub has just completed her seventh and final year as a Stoa competitor. Her biggest accolades are in dramatic interpretation, earning finalist awards in several events including Monologue and Dramatic Interp. Tabitha’s true joy is in writing. She aspires to be a writer and serves as copy editor for Monument Publishing.