Rebecca Sumner has been debating for four years. She has qualified for team policy debate at NITOC for three years in a row. All three times, the qualification came within the first three tournaments.

US companies sell weapons that end up with a dangerous para-military force in Honduras known for its brutality and human rights violations. Official US policy is that we’re not supposed to arm them, so instead we sell them to other agencies of the Honduran government who then turn around and give them to these guys. The impacts are awful. Journalists and activists aren’t given the freedom of expression. When they speak out, they are assassinated. Honduras is the most dangerous country for environmentalist activists. Instead of protecting the people, the Honduran security services that we are supporting are oppressing them. This plan cancels US arms sales to Honduras.

Negative will argue that U.S. manufacturers will be hurt, because they’ll lose the deals they could make on weapons sales to Egypt. Not only that, but Egypt doesn’t have enough resources for this cut to military aid, and they won’t be able to fight terrorism like they’re doing now. Ending military aid would cause Egypt to break away from alliance with the U.S., harming US foreign policy interests, weakening US influence in the Middle East, and destabilizing the entire region. And it would motivate Egypt to drop out of its Peace Treaty with Israel, further increasing the risks of war and instability in the already volatile Middle East.

Negative will show that US coalition support reduces, not aggravates, the suffering in Yemen.  And fighting the rebels in Yemen is a good thing because they’re really bad guys and create serious threats.  Supporting Saudi Arabia and UAE is the best policy both for Yemen and the rest of the world. 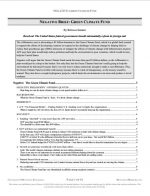 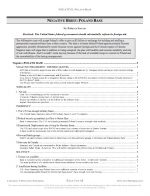 The Affirmative case will accept Poland’s offer to give us $2 billion in exchange for building and staffing a permanently manned military base in their country. The idea is to better defend Poland against potential Russian aggression, possibly threatened by recent Russian moves against Georgia and the Crimean region of Ukraine. Negative team will argue that in addition to being untopical, the plan will backfire and increase instability and risk of war with Russia. And it wouldn’t work anyway because of the lack of available troops to commit to Poland and the unworkability of the basing arrangements.